We all love French fries, right? And can you just stop at a handful? Never! Some of us have intense and uncontrollable cravings for crispy French fries, and although we know that it’s not healthy to indulge in these high-calorie delights on a daily basis, we still do, because these crispy things are hard to resist! But do pay attention to these cravings, especially if you are trying to get healthy and lose weight because the high fat content and empty calories do add up and make shedding of extra pounds difficult. A new study also reveals that industrially-produced French fries may have a compound called “acrylamide,” that can increase the risk of cancer. However, if you find cravings for irresistible, it’s time to find out the real reason. We often think “hedonic hunger,” is the real reason behind indulging in high fat and sugar stuff, which is not real hunger where we eat to meet body’s energy requirements, instead eating to find comfort and pleasure from such foods. We all would admit that foods high in fat tend to be comforting and have an amazing way to soothe jittery nerves. (Also read: Why Are Fried Foods Bad For Weight Loss?). In fact, cravings for salty and crispy foods like French fries have been found to relieve feelings of frustration, anger, and stress. But wait, there’s more story behind these unrelenting desire to have eat chips and French fries. Here you go: 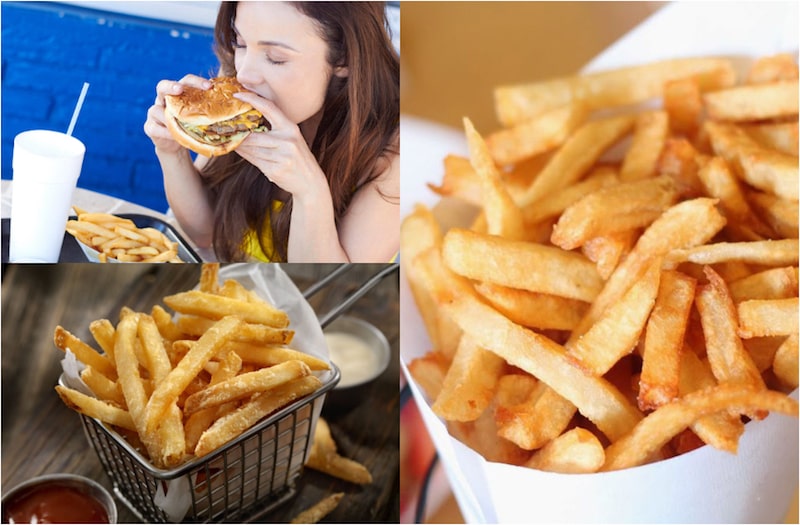 Why you Can’t Say “No” To French Fries?

There are a few reasons; covering them one by one:

1. The study done at Proceedings of the National Academy of Sciences, US, has shown that French fries and other food stuff rich in fat, trigger the production of “endocannabinoids” in the brain, which has been found an effect similar to marijuana. These chemicals, make you addicted, and keep your cravings for such food intense, so much so that you keep coming back for more fries. Endocannabinoids also affect appetite and sense of taste, increasing hunger and appetite.

2. Though food cravings are commonly associated with emotional and stress, some cravings maybe your body’s way of indicating a particular nutritional deficiency. Calcium deficiency has been linked to increase in cravings for chips and high-sodium foods like French fries. Calcium is a mineral which can trigger the craving for salt because salt tricks the body into thinking there’s enough calcium. Instead of reaching for high-salt foods, address the issue and eat calcium-rich food like almonds, yogurt, sesame seeds, milk, instead. Also read: “What you Are Craving Vs What Your Body Needs.”
3. Dehydration: The most common reason that triggers an intense desire to have chips and salty food like French fries, has been found to be dehydration. Keep yourself hydrated and when cravings for these high-fat crispy things hit, sip on a glass of water instead.

4. Foods like French fries come under the category of “hyperpalatable foods,” that stimulate the reward center of brain, triggering the release of “feel-good chemicals” such as dopamine that can keep people in a constant state of craving, making them addicted to them. These foods are called “hyperpalatable” and have ingredients like sugar, sodium, unhealthy fat, and certain synthetic ingredients that enhance their taste that trick the brain into releasing dopamine neurotransmitters, so that you want to have more of such food, to actually “feel good.”

5. Now, coming to a major reason behind your never-ending craving for French fries. A recent study shows that high-fat foods like French fries can impact the gut bacteria growth and numb out the sensation that the gut sends when it is full. This study was actually done rats in the lab, where these animals on a high-fat diet not only gained weight, their gut microbiome got altered, which in turn damaged the vagus nerve (which signals the brain when we are full), which cut off the signalling between the gut and brain to indicate that it is full. High-fat foods actually change the bacteria in your gut, and make it so that we’re unable to detect the sensation that we’re full. This shows that having high-fat food regularly (such as French fries), can impact the signalling system between the gut and brain, and we tend to eat beyond the point of fullness, with an insatiable appetite.

Why you Should Avoid Eating French Fries Regularly?

1. To deep fry French fries, the oil needs to be heated at a high temperature where the chemical structure of oil gets altered, rendering it extremely unhealthy for consumption, not to mention, raising inflammation in the body. Inflammation, as we all know, can trigger many life-threatening diseases including obesity.

2. The presence of transfat in commercially available French fries can trigger weight gain, particularly belly fat. Transfat is artificially made from vegetable oils by a process called hydrogenation where hydrogen molecules are added to the oil. Transfat is complete no-no for people who want to lose weight, especially tummy fat because studies have revealed that transfat can actually move fat from other areas of the body to the belly area!

What To Do Instead?

When the cravings for French fries hit, address the root cause, and pick healthier alternatives to satisfy those cravings – roasted chickpeas, baked sweet potato fries, popcorn are some options for you. Also, a well-balanced diet (Rati Beauty diet that helps you lose weight as well) comprising of whole foods, healthy fats, protein, etc., would help curb appetite and cravings for unhealthy foods such as French fries. Probiotics and fermented food improve the endocannabinoid functioning in the gut. Also, switch to organic food and say “no” to plastics because pesticides and plastics have been found to impair gut microbiome and also disrupt hormones that regulate appetite. Additionally, exercise regularly, go for a walk or jog, interact with like-minded people to release stress. Massage, acupuncture, yoga, social interaction have all been found to enhance endocannabinoid release.

So, the next time around a bag of French fries call you by name, stop, and address the real reason behind such an unhealthy craving.

Why Are Fried Foods Bad For Weight Loss?
What you Are Craving vs What Your Body Needs