Everyone says weight loss depends on watching what you eat, maintaining a calorie deficit, and exercising regularly, but there is increasing evidence that there’s a strong link between obesity and digestive issues. The function of digestive system is not limited to breaking down food and making absorption of nutrients easier. And don’t be surprised if we tell you that your gut has a great role to play in weight loss/weight gain, and some digestive issues might be the reason you are actually struggling to flatten out that belly fat. While most gastrointestinal conditions can lead to unintentional weight loss, there are certain digestive problems that actually make it difficult to lose weight. Smooth running (pun intended) of the gut is extremely important for overall health, more so if you are trying to get lean, because digestive problems can lead to mismanagement of calories, and as we all know, weight loss depends largely on the calorie game. Also, experts believe that the type of bacteria in your gut can affect how many calories get absorbed from the food you eat. Coming back to the gut, there are trillions of bacteria that reside in the gut, taking part in digestion of food, absorption of nutrients and vitamins, and also production of important hormones like ghrelin, PYY, GLP-1, CCK (all of which play a role in weight management). Additionally, some microbes residing in your gut may change your sensitivity to insulin, encouraging the body to burn fat. Now that we have explained the importance of gut in weight management, read about 8 Ways Digestive Problems Make It Difficult To Lose Weight. 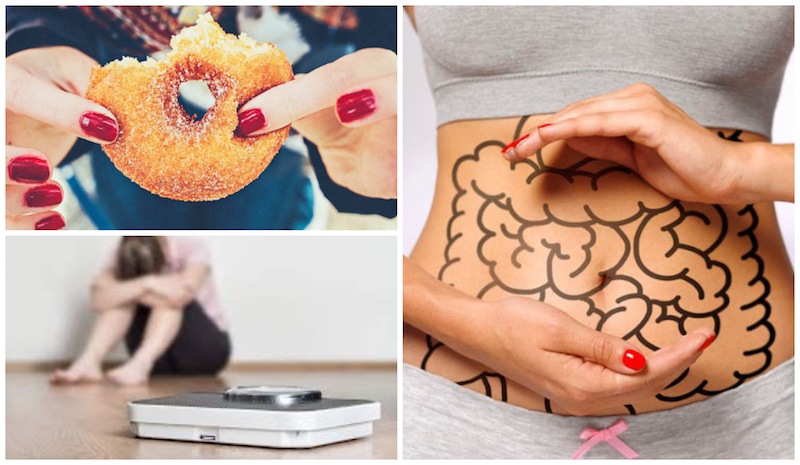 1. Gut Dysbiosis: As we had mentioned earlier, there are trillions of microbes with around 1,000 species of bacteria that form the gut microbiome. The gut microbiome keeps the digestion process smooth and immune system robust. When there is gut dysbiosis or an imbalance between healthy bacteria and bad bacteria, your health suffers. Small intestinal bacterial overgrowth (SIBO) can happen due to overgrowth of bad bacteria and it can lead to weight gain in two ways – the bacteria could produce methane gas, which negatively affects the overall function of small intestine, causing the finger-like projections in the intestine to absorb more calories per morsel! SIBO also lowers metabolism and heightens insulin and leptin resistance, triggering appetite and cravings for carbs.

2. Acid Reflux: People with acid reflux would agree how that sharp and painful burning sensation can be taken care of temporarily when they eat some food. Yes, having a certain amount of food does help in subsiding acid reflux symptoms, but once this food is digested, acid reflux symptoms return – this time more strongly! And bloating, hiccups, nausea are included in the cluster. To tackle these symptoms, one might get tempted to eat some food. This tendency of consuming food every time reflux symptoms return will lead to overeating and eventually weight gain. Also, some gastric medicines list weight gain as a side effect!

3. Irritable Bowel Syndrome: IBS or irritable bowel syndrome is a real issue and people suffering from this disorder, complain about a cluster of symtoms like bloating, painful spasms, diarrhea, etc. IBS can also cause anxiety and depression which may in turn trigger emotional eating. IBS sufferers also tend to replace nutrient-dense food with calorie-rich stuff (ice cream, sugar-rich cold coffee for example) to alleviate symptoms – and all those extra calories from such food make it extremely difficult to lose weight. Increase fiber, drink lots of water, get good quality sleep, and follow a low-FODMAP diet (avoiding fermentable oligosaccharides, disaccharides, monosaccharides, and polyols).

4. Gluten Intolerance: Gluten is a group of proteins, comprising of glutenin and gliadin, which is commonly found in wheat. Gluten gives the flour its sticky and glue-like texture when mixed with water. In India, wheat is the commonly-consumed gluten-rich food; however, people with certain medical conditions and autoimmune disorders such as celiac disease and irritable bowel syndrome are allergic to gluten where their immune system triggers a reaction against the presence of gluten in the body and damages gluten as well as the lining of the gut wall, which may further lead to reactions such as diarrhea, anemia, headache, rashes, and even depression. Weight gain is also commonly seen in people with gluten allergy and they should avoid wheat and cereals that have this set of protein in them. If you have tested for gluten intolerance, it would be prudent to give up food with gluten in them. Also read: “10 Gluten-Free Options To Make Roti.”

5. Bloating: It can cause temporary accumulation of fluid and gas in the digestive system, making the numbers on the scale jump up. It can also make your tummy bulge out. But fret not, bloating symptoms can be alleviated with these tips – “14 Tips To Get Rid of Bloated Tummy.”

6. Colitis and Crohn’s Disease: Crohn’s disease is the inflammation of the bowel wall (can happen in part of the digestive system), and ulcerative colitis is inflammation of the inner lining of the large intestine. Effective treatment of these conditions include steroids and this category of medication increases appetite and weight gain.

7. Constipation: Wrong dietary habits, dehydration, sedentary lifestyle, lack of fiber, etc., can cause constipation. People with constipation have also been found to have low metabolism, and as we all know, metabolism is the process which torches calories, and to lose weight, you need to have a robust metabolism. Lead an active lifestyle and place a great deal of importance on eating whole and real foods to avoid constipation.

A lot of these digestive issues can be tackled by watching your diet and eating the right kind of food. And the good news is that with Rati Beauty diet, you can lose weight by consuming nutrient-dense healthy food.

How To Improve Gut Health:

1. Include prebiotics in the diet.
2. Consume more probiotics.
3. Have fermented food to decrease inflammation. Eating naturally fermented foods, such as kefir, kmbucha, sauerkraut, and Greek yoghurt.
4. Avoid food that trigger allergies and raise inflammation in the gut – gluten and lactose for example.

Most importantly, consult your doctor and follow the treatment routine as prescribed by them.